Isdones [pronounced "iizdonés"] is the central of the western regions of Elatha, bordered by Waeland to the north, Delos to the south, and Alayte to the east. It is the native region of the Halflings, High Elves and Wood Elves.

The dominant species of Isdones are Grey Elves, Halflings, High Elves, Humans - Navarisians and Waelinga - and Wood Elves.Other species, such as Dwarves and Orcs are rare, but no unheard of.

A small river running from the Green Hills and into the Greenwood River, the Apple Stream is a favourite breeding spot for Silver Salmon.

The Dragon Spires are among the tallest mountains on Elatha, and are rumoured to be the home of numerous Dragons; hence the name. Two passes - the Blackfire Pass to the north and the Dragon Pass to the south - cuts through the Dragon Spires, enabling access to the region of Alayte, which lies beyond. The High Elf fortress-city of Ardolath lies hidden somewhere within the Dragon Spires.

Greenwood Forest lies at the spot where the Greenwood River absorbs the Apple Stream. It is home to an enclave of High Elves, who occasionally trades with the inhabitants of nearby Archenbury.

Running from the Moon Hills and south, the Greenwood River is the third of the major rivers in Isdones. On its way, it absorbs the Apple Stream before being absorbed itself by the Dragonspine River.

The Moon Hills are the common name for the hills from which the Greenwood River and the Moon River springs. Covered in vibrant green grass and Silverleave Trees, the Moon Hills were long the burial grounds of Hirannorean kings. Though that practice have now been abandoned, old tombs can still be found in the hills.

Running northwest from the Moon Hills, the Moon River passes through Moon Wood before being absorbed by the Northstream.

Moon Wood lies near the spot where the Northstream absorbs the Moon River. The Wood Elf city of Menethorn lies hidden somwehere inside the Moon Wood.

Along with the Northstream, the Northern Peaks forms the northern boundary of Isdones. It is home to an enclave of High Elves.

Isdones is the native region of the Halflings, High Elves and Wood Elves, and these races were the first to settle in Isdones. Waelinga from the north were the first outsiders to arrive, founding several smaller states south of the Northern Peaks. They spread, eventually founding Balfor and Hirannor. They were followed soon after by the Grey Elves, who founded Linfalas. Later, humans from the south - Navarisians - colonised south-western Isdones, eventually founding Kernapis.

Isdones suffered little from the depravations of the Orcs, in no small part thanks to the skills of the Elven warriors from Ardolath, Linfalas, and Menethorn. After several bloody battles at the eastern boundary of Isdones, the Orcs turned north, preferring the easier pickings in Waeland. 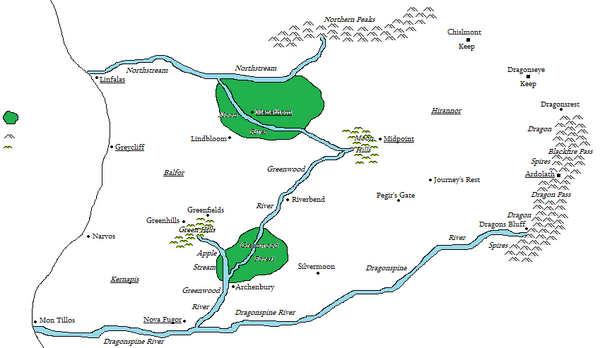 Retrieved from "https://confan.fandom.com/wiki/Isdones?oldid=3548"
Community content is available under CC-BY-SA unless otherwise noted.