Gnolls are large, evil, hyena-like humanoids that roam about in loosely organized bands.

While the body of a gnoll is shaped like that of a large human, the details are those of a hyena. They stand erect on two legs and have hands that can manipulate as well as those of any human. They have greenish grey skin (darker near the muzzle) with a short reddish grey to dull yellow mane.

Gnolls have their own language and many also speak the tongues of trolls, orcs, or hobgoblins. 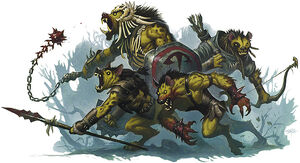 In combat, gnolls seeks to overwhelm their opponents by sheer numbers, using horde tactics. When under the direction of a strong leader, they can be made to hold rank and fight as a unit. Gnolls prefer polearms, swords and axes, but also use bows and morningstars.

Gnolls are most often encountered underground or inside abandoned ruins. When above ground they operate primarily at night. Gnoll society is ruled by the strongest, using fear and intimidation.

Gnolls will work together with orcs, hobgoblins, bugbears, ogres and trolls. If encountered as a group, there must be a relative equality of strength. Otherwise the gnolls will kill and eat their partners, or be killed and eaten by them. Gnolls dislike goblins, kobolds, giants, humans, demi-humans and any type of manual labor.

Gnolls eat anything warm blooded, favouring intelligent creatures over animals because they scream better. When allowed to die of old age, the typical gnoll lives to be about 35 years old.

Retrieved from "https://confan.fandom.com/wiki/Gnoll_(Danaan)?oldid=5307"
Community content is available under CC-BY-SA unless otherwise noted.