Though their lives span several human generations, elves appear at first glance to be frail when compared to man. However, elves have a number of special talents that more than make up for their slightly weaker constitutions.

Wood Elves, the most common type of elf, is somewhat shorter than men, never growing much taller than 150 centimetres. Male elves usually weigh between 40 and 55 kilograms, and females weigh between 30 and 45 kilograms. Most wood elves are dark-haired, and their eyes are a beautiful, deep shade of green. They possess lowlight vision up to 20 meters. The features of an elf are delicate and finely chiseled.

Elves have very pale complexions, which is odd because they spend a great deal of time outdoors. They tend to be slim, almost fragile. Their pale complexion and slight builds are the result of a constitution that is weaker than man's. Though they are not as sturdy as men, elves are more agile. Elven clothing tend to be colourful, but not garish. The often wear pastel colours, especially blues and greens. Because they dwell in forests, wood elves often wear greenish grey cloaks to afford them quick camouflage.

Elves have learned that it is very important to understand the creatures, both good and evil, that share their forest home. Because of this, elves may speak the tongues of goblins, orcs, hobgoblins, gnolls, gnomes and halflings, in addition to the common tongue and their own highly-developed language. They will always show an interest in anything that will allow them to communicate with, and learn from, their neighbours.

Elves are cautious fighters and always use their strengths to advantage if possible. One of their greatest strengths is the ability to pass through natural surroundings, woods, or forests, silently and almost invisibly. By moving quickly and blending into vegetation for cover, elves will often surprise a person or group. As long as they are not attacking, the elves hiding in the forest can only be spotted by someone or something with the ability to see invisible objects. The military value of this skill is immense, and elven armies will always send scouts to spy on the enemy, since such spies are rarely caught - or even seen.

Although their constitutions are weak, elves possess an extremely strong will, such strong wills, in fact, that they are virtually immune to charm and sleep magic.

Elves live in the wild, so weapons are used for everything from dealing with the hostile creatures around their camps, to such mundane tasks as hunting for dinner. Elves are especially proficient with short- and long-swords and most types of bows. Because of their agility, elves can move, fire a bow, and move again, all within the space of a second. Elven archers are extremely mobile, and therefore dangerous.

Because of limitations of horses in forest combat, elves do not usually ride. Elves prefer to fight as foot soldiers and are generally armed as such. Most elves wear scale or chain mail, and almost all elves carry shields. Their favoured weapons are long swords and bows. They also use spears and occasionally great swords.

Elven women are the equal of their male counterparts in all aspects of warfare, and often fight alongside the men in battles.

Elves value their individual freedom highly and their social structure is based on independent bands. These small groups, usually consisting of no more than 200, recognize the authority of a royal overlord, who in turn owes allegiance to a king or queen. However, the laws and restraints set upon elven society are very few compared to human society and practically negligible when compared to dwarven society.

Elven camps are always well-hidden and protected. In addition to the large number of observation posts and personnel traps set around a camp, wood elves typically set a small number of giant eagles as guardians of their encampments.

Because elves live for hundreds of years, their view of the world is radically different from most other sentient beings. Elves do not place much importance on short-term gains nor do they hurry to finish projects. Humans see this attitude as frivolous; the elves simply find it hard to understand why everyone else is always in such a rush.

Elves prefer to surround themselves with things that will bring them joy over long periods of time - things like music and nature. The company of their own kind is also very important to elves, since they find it hard to share their experiences or their perspectives on the world with other races. This is one of the main reasons elven families are so close. However, as friendship, too is something to be valued, even friends of other races remain friends forever.

Though they are immune to a few specific spells, elves are captivated by magic. Not specific spells, of course, but the very concept of magic- Cooperation is far more likely to be had from an elf, by offering an obscure, even worthless (but interesting) magical item, than it is with two sacks of gold. Ultimately, their radically different perspective separates the elves from the rest of their world. Elves find dwarves too dour and their adherence to strict codes of law unpleasant. However, elves do recognize dwarven craftsmanship as something to be praised. Elves think a bit more highly of humans, though they see man's race after wealth and fleeting power as sad. In the end, all elves return to their native forests to live out their lives among their own kind.

Elves produce fine clothes, beautiful music, and brilliant poetry. It is for these things that other creatures know the folk of the forest best, In their world within the forest, however, elves hold in check the dark forces of evil, and the creatures that would plunder the forest and then move on to plunder another. For this reason, elves are irreplaceable. 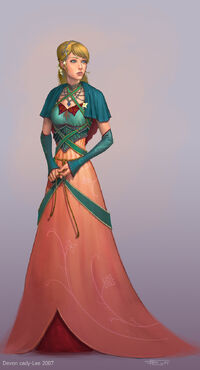 High Elves are the most noble and regal of all elves. Taller (averaging some 160 cm) and grander in physical appearance than others, high elves have a reputation of being aloof and arrogant, even by elven standards. They certainly are more reclusive than wood elves, living in isolated mountain citadels and allowing entry only to a select few outsiders. They have either silver hair and amber eyes or pale golden hair and violet eyes. They prefer clothing of white, silver, or gold, with cloaks of deep blue or purple. 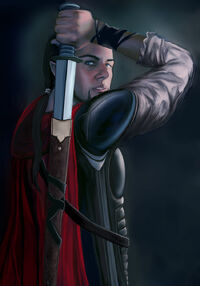 Half-Elves are of human stock, and have features of both the elf and human parents. They are slightly taller than common elves, growing as tall as 170 centimetres and weighing up to 70 kilograms. They have low-light vision just like common elves.

A half-elf can travel freely between most elven and human settlements, though occasionally prejudice will be a problem. A half-elf's life span is their biggest source of grief, however. Since a half-elf live more than 125 years, he or she will outlive any human friends or relatives, but grow old too quickly to be a real part of elven society. Many half-elves deal with this by travelling frequently between the two societies, enjoying life as it comes; the best of both worlds.

Retrieved from "https://confan.fandom.com/wiki/Elf_(Danaan)?oldid=5340"
Community content is available under CC-BY-SA unless otherwise noted.