Dwarves are a noble race of demi-humans who dwell under the earth, forging great cities and waging massive wars against the forces of chaos and evil. Dwarves also have much in common with the rocks and gems they love to work, for they are both hard and unyielding. It has often been said that it is easier to make a stone weep that it is to change the mind of a dwarf.

Standing from 120 to 140 centimetres in height, and weighing 60 to 80 kilograms, dwarves tend to be stocky and muscular. They have ruddy cheeks and bright eyes. Their skin is typically deep tan or light brown. Their hair is usually black, grey, or brown, and worn long, though not long enough to impair vision in any way. They favour long beards and moustaches as well. Dwarves value their beards highly and tend to groom them very carefully. Dwarves do not favour ornate stylings or wrappings for their hair or beards.

Dwarven clothing tends to be simple and functional. They often wear earth tones, and their cloth is considered rough by many other races, especially humans and elves. Dwarves usually wear one or more pieces of jewelry, though these items are usually not of any great value or very ostentatious. Though dwarves value gems and precious metals, they consider it bad taste to flaunt wealth.

Dwarves have found it useful to learn the languages of many of their allies and enemies. In addition to their own language, Kazul, dwarves often speak the languages of gnomes, goblins, kobolds, orcs, Caverntongue, and the common tongue, which is frequently used in trade negotiations with other races. 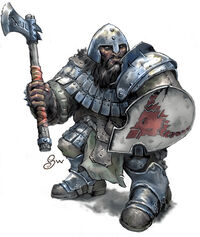 Dwarves are courageous, tenacious fighters who distrusts magic. They rarely use magical spells or train as wizards, though they do make use of clerics.

It should be noted that dwarven women are no less skilled in combat that the men, and happily fight alongside the men if their homes are attacked.

Usually constructed around profitable mines, dwarven cities are vast, beautiful complexes carved into solid stone. Dwarven cities take hundreds of years to complete, but once finished they stand for millennia without needing any type of repair. Since dwarves do not leave their homes often and always return, they create their cities with permanence in mind.

Dwarven society is organized into clans. A dwarven clan not already attached to a city or mine travels until it finds an outpost from where to ply its trade. Clans often settle close together since they usually need the same raw materials for their crafts. Clan are competitive, but rarely war against one another. Dwarven cities are founded when enough clans move to a particular location.

Each dwarven clan usually specializes in a particular craft or skill; young dwarves are apprenticed at an early age to a master in their clan (or, occasionally, in another clan) to learn a trade. Since dwarves live so long, apprenticeships last for many years. Dwarves also consider political and military service a skilled trade so soldiers and politicians are usually subjected to a long period of apprenticeship before they are considered professionals.

To people from other races, life within these cities might seem as rigid and unchanging as the stone the dwarven houses are carved from. In fact, it is. Above all, dwarves value law and order. This love of stability probably comes from the dwarves' long life spans, for dwarves can watch things made from wood and other mutable materials decay within a single lifetime. It shouldn't be surprising, then, that they value things that are unchanging and toil ceaselessly to make their crafts beautiful and long-lived. To a dwarf, the earth is something to be loved because of its stability and the sea a thing to be despised - and feared - because it is a symbol of change.

Dwarves also prize wealth, as it is something that can be developed over a long period of time. All types of precious metals, but particularly gold, are highly prized by the dwarves, as are precious stones such as diamonds and emeralds. They do not value pearls, however, as they remind them of the sea and all that it stands for. Dwarves, however, think that advertising one's wealth is bad taste. One's hoard is best counted in secret, so that neighbours are not offended or tempted.

Most other races see dwarves as a greedy, dour, grumpy people who prefer the dampness of a cave to the brightness of an open field. This is partially true. Dwarves have little patience for men and other short-lived races (since man's concerns seem so petty when seen with dwarven eyes). Dwarves also distrust elves because they are not so serious-minded as dwarves and waste their long lives on pastimes that dwarves find frivolous. However, dwarves have been known to band together with both men and elves in times of crisis, and long-term trade agreements and alliances are common.

Dwarves have no mixed feelings about the evil races that dwell below the ground, however. They have an intense hatred of orcs, goblins, evil giants, and dark elves. The dire creatures under the earth often fear dwarves as well, for the short, stout folk are tireless enemies of evil and chaos. It is a goal of the dwarves to wage constant and bitter war against their enemies under the earth until either they or their foes are destroyed.

Since much of their culture is focused on creating things from the earth, dwarves produce a vast amount of useful, valuable trade material. Dwarves are skilled miners. Though they rarely sell the precious metals and rough gems they uncover, dwarven miners have been known to sell surpluses to local human communities. Dwarves are also skilled engineers and master builders - though they work almost exclusively with stone - and some dwarven architects work for humans quite frequently.

Dwarves most often trade in finished goods. Many clans are dedicated to work as blacksmiths, silversmiths, goldsmiths, armourers, weapons makers, and gem cutters. Dwarven products are highly valued for their workmanship, and in human communities often demand prices up to 20% higher than locally produced items. Many people are willing to pay a high price for a suit of dwarven mail or a dwarven sword. Humans know that the dwarf who forged it made it to last a dwarven lifetime, so they'll never need to worry about it wearing out in theirs.

Retrieved from "https://confan.fandom.com/wiki/Dwarf_(Danaan)?oldid=5306"
Community content is available under CC-BY-SA unless otherwise noted.