Centaurs are woodland beings who shun the company of men. They dwell in remote, secluded glades and pastures.

The appearance of a centaur is unmistakable; they have the upper torso, arms, and head of a human being and the lower body of a large, powerful horse.

Centaurs speak their own language and some among them can converse in the elven tongue. Centaurs worship the gods of the Elven Pantheon, particularly Arien. 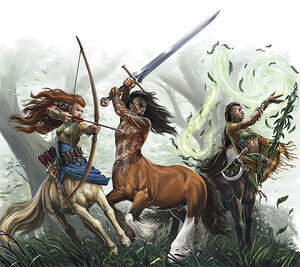 A band of centaurs is always armed, and the leaders carry shields. Half the centaurs will be wielding great clubs or great swords, and half will be carrying composite bows and some sort of hand weapon, usually a mace.

Centaurs are sociable creatures, taking pleasure in the society of others of their kind. Their overall organization is tribal, with a tribe divided into family groups living together in harmony. The size of a tribe varies, ranging from 3-4 families to as many as 20 families. Since males have the dangerous roles of hunter and protector, females outnumber males by two to one. The centaur mates for life, and the entire tribe participates in the education of the young.

The lair is located deep within a forest, and consists of a large, hidden glade and pasture with a good supply of running water. Depending upon the climate, the lair may contain huts or lean-tos to shelter the individual families. Centaurs are skilled in horticulture, and have been known to cultivate useful plants in the vicinity of their lair. In dangerous, monster infested areas, centaurs will sometimes plant a thick barrier of tough thorn bushes around their lair and even set traps and snares. In the open area, away from the trees, are hearths for cooking and warmth.

Centaurs survive through a mixture of hunting, foraging, fishing, agriculture, and trade. Though they shun dealings with humans, centaurs have been known to trade with elves, especially for food and wine. The elves are paid from the group treasury, which comes from the booty of slain monsters.

The territory of a centaur tribe varies with its size and the nature of the area it inhabits. Centaurs are also not above sharing a territory with elves. The attitude of a centaur toward a stranger in its territory will vary with the visitor. Humans and dwarves will usually be asked to leave in a polite manner, while halflings and gnomes will be tolerated, and elves welcomed. Monsters will be dealt with in a manner according to the threat they pose to the welfare and survival of the tribe. Were a giant or dragon to enter the territory, the centaurs would pull up stakes and relocate, while trolls and orcs and their like will be killed.

Centaurs will take the treasure of their fallen foes, and are fully aware of its value. Most male centaurs have a small coin supply, while the tribe has a treasury which may well include some magical items. This treasure is used to buy food for the group, or to ransom captured or threatened members of the tribe.

While basically neutral or chaotic good, centaurs have been known to become rowdy, boorish, and aggressive when under the influence of alcohol. They are also extremely protective of their females and young. Centaurs are basically pastoral, but will react with violence if their lifestyle and survival is threatened.

The centaur lives in close harmony with nature and spends its lifetime carefully conserving the natural resources around its lair. The race seems to have an innate knowledge of how to achieve this precious balance. If forced to chop down a tree, a centaur will plant another to replace it. Centaurs never over hunt or over fish an area as a human group might do, but choose their game with care, limiting the amount they eat.

Retrieved from "https://confan.fandom.com/wiki/Centaur_(Danaan)?oldid=5475"
Community content is available under CC-BY-SA unless otherwise noted.