The beholder is the stuff of nightmares. This creature, also called the sphere of many eyes or the eye tyrant, appears as a large orb dominated by a central eye and a large toothy maw, and has 10 smaller eyes on stalks sprouting from the top of the orb. Among advemnturers, beholders are known as deadly adversaries.

The globular body of the beholder is supported by levitation, allowing it to float slowly about as it wills.

Beholders are usually solitary creatures, but there are reports of large communities of beholders living deep beneath the earth.

All beholders speak their own langauge. In addition, they often speak the tongues of other lawful evil creatures, such as dark dwarves, hobgoblins, and mind flayers. 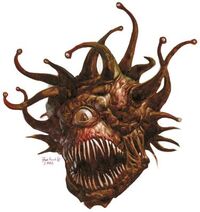 Each of the beholder's eyes, including the central one, has a different function. The standard smaller eyes of a beholder are as follows: charm person, charm monster, sleep, telekinesis, flesh to stone, disintegrate, fear, slow, cause serious wounds, death ray.

The central eye produces an anti-magic ray with a 130-metres range, which covers a 90 degree arc before the creature. No magic (including the effects of the other eyes) will function within that arc. Spells cast in or passing through that zone cease to function.

The beholder can withstand the loss of its eyestalks. Destroying the central eye will eliminate the anti-magic ray. Slaying the body will kill the beholder and render the eyes powerless. Destroyed eyestalks (but not the central eye) can regenerate at a rate of one lost member per week.

The beholders are a hateful, aggressive and avaricious race, attacking or dominating other races, including other beholders. This is because of a xenophobic intolerance among beholders that causes them to hate all creatures not like themselves. The basic, beholder body-type (a sphere with a mouth and a central eye, eye-tipped tentacles) allows for a great variety of beholder subspecies. Some have obvious differences, such as overlapping chitin plates or smooth hides, but something as small as a change in hide colour or size of the central eye can make two groups of beholders sworn enemies. Every beholder declares its own unique body-form to be the "true ideal" of beholderhood, the others being nothing but ugly copies, fit only to be eliminated.

Beholders will normally attack immediately. If confronted with a particular party there is a good (50%) chance that they will listen to negotiations (bribery) before raining death upon their foes.

The exact reproductive process of the beholder is unknown. The core racial hatred of the beholders may derive from the nature of their reproduction, which seems to produce identical (or nearly so) individuals with only slight margin for variation. Beholders may use parthenogenic reproduction to duplicate themselves, and give birth live (no beholder eggs have been found).

There are rumours of the existence of a number of variant creatures known collectively as beholder-kin, including radical and related creatures, and an undead variant. These creatures are related in manners familial and arcane to the "traditional" beholders, and share a number of features, including the deadly magical nature of their eyes. There have been no confirmed sightings of any of these beholder-kin, however.

Retrieved from "https://confan.fandom.com/wiki/Beholder_(Danaan)?oldid=5472"
Community content is available under CC-BY-SA unless otherwise noted.